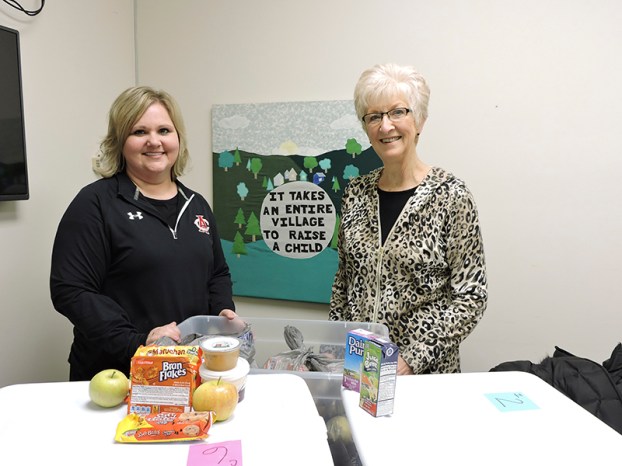 Rosie Rasmussen, director of the Alden Area Food Shelf, right, came to Alden-Conger Elementary Dean of Students Linnea Petersen with the idea of starting the backpack program. Students pack bags that are loaded into totes and later picked up by teachers to deliver to participants. - Kelly Wassenberg/Albert Lea Tribune 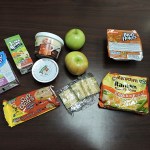 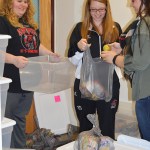 Students who give up their study hall to fill bags for the backpack program do so voluntarily. – Provided 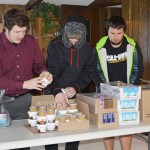 Students in one of the high school study hall classes can volunteer to pack food for the backpack prorgram. -Provided 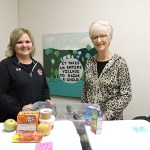 Rosie Rasmussen, director of the Alden Area Food Shelf, right, came to Alden-Conger Elementary Dean of Students Linnea Petersen with the idea of starting the backpack program. Students pack bags that are loaded into totes and later picked up by teachers to deliver to participants. – Kelly Wassenberg/Albert Lea Tribune

A crowded household of 11, full of love and hand-me-downs. Most of what gets put on the table was raised near the barn or grown in the garden.

It was a way of life for Rosie Rasmussen, who grew up on a farm outside of Hayward.

“Something like that makes you who you are,” she said.

Much has changed since those days. Rasmussen, now 77, graduated from high school in Albert Lea before attending nursing school. She got married and raised her family in Alden, where her children would be raised and graduate from high school. Years later, she would move to Albert Lea, but even 18 years later still attended church and many other functions in the town she raised her family.

Filled with family and friends, the town of Alden still feels like home. After so many years of taking care of others, the need to continue to do so is engrained her being.

Memories of her parents struggling to make ends meet were just one of the reasons she stepped forward when the pastors at the local churches in Alden asked for volunteers to come to a meeting discuss the start of the Alden Area Food Shelf.

Rasmussen said she never thought she would be the shelf’s director, but since its founding in 2003 she has done just that. In the beginning, Barb Stenzel was her co-director, but she has taken on the duties of directing the food shelf solo for the last two years with the help of volunteers.

Despite losing her co-director, Rasmussen has not only continued to run the program at the Alden Area Food Shelf, but to expand it outside the doors of Redeemer Lutheran Church where it is housed.

Once teachers came to her with stories of children coming up to them and requesting food because they were hungry, she saw a need that the food shelf could fulfill and set out on doing just that.

After contacting a representative from Channel One Regional Food Bank in Rochester, Rasmussen arranged a meeting with Linnea Petersen, Alden-Conger’s elementary dean of students, to present the idea of starting a backpack program at the school last spring.

“Parents are definitely thankful for the program,” Petersen said.

The teachers are also thankful as it is hard for the students to concentrate on reading, writing and arithmetic when they’re hungry, she said.

According to Rasmussen, the food shelf has great volunteers, but not enough to implement the program. That’s where Alden-Conger High School students help out. One of the study hall periods at the school has adopted the project. Along with a couple staff members, students voluntarily go next door to the church with plastic totes and bring the food for the program to the school so they can pack it.

Each bag contains eight items that will make two hot meals, fruit cups, snacks, a juice box and a shelf stable carton of milk to help supplement the participant’s diet over the weekend. The students then place the bags in coded containers that are later picked up by teachers and discretely tucked into the backpacks of elementary and middle school students who have signed up for the program. About 54 students are serviced by the program.

Inside the bags parents will also find information on the Alden Area Food Shelf to make sure they know the shelf is there if they need it.

Rasmussen gives herself little credit for the success of the program. Alden-Conger Superintendent Brian Shanks processes the requests for participation in the program, and students and staff take care of the implementation process. She said she only orders the food.

According to Petersen, she has done so much more.

“We are very thankful for Rosie and the Alden Area Food Shelf for getting this started for us,” Petersen said.

Why does she continue with the program despite not living there? Rasmussen still considers herself a part of the Alden community, as it is filled with so many friends and family members.

54 – Students participating in the backpack program

12 – Years of service Rasmussen has had, either serving as co-director or director of the Alden Area Food Shelf

Seeing people have a good time. That’s what Mark Heggestad of Emmons said is his payoff as chairman of Borderfest... read more