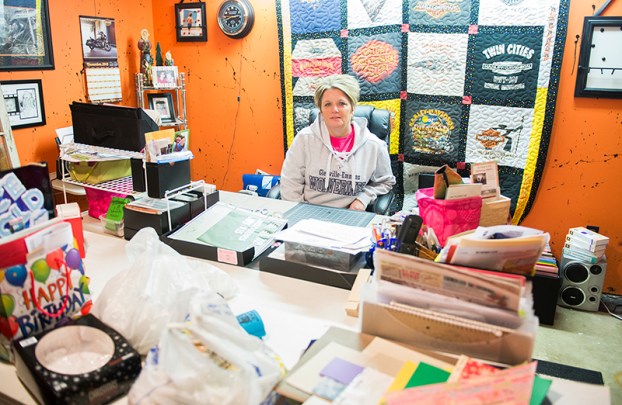 Jodi Attig, pictured in her scrapbooking room, is an avid scrapbooker and has been active with the annual scrapbooking fundraiser Crop for the Cure. - Colleen Harrison/Albert Lea Tribune

Playing a role in the Glenville community

GLENVILLE — Jodi Attig has lived in Glenville for 15 years, and that’s where she plans to stay.

Attig is originally from the Northwood area, and moved to Glenville after she married her husband, John. She has been involved in her community in many different ways since she first moved to the area.

For the last eight years, Attig has helped run Crop for a Cure in Carpenter, Iowa. The event is a fundraiser for the Lyle Area Cancer organization. Attig said the event has raised over $ 50,000 — not including this past year’s event in November, for which numbers haven’t been released yet. The event is comprised of a number of people getting together to scrapbook, and also has silent and live auctions, chair massages for $1 a minute and other activities to benefit cancer research at both Mayo Clinic and the Hormel Institute. The event and its purpose are very personal for Attig, as she lost her father 15 years ago to cancer.

“Everybody’s been affected somehow,” she said. “It’s a fun way to get together and raise money for a good cause.”

There are several ways Attig can be spotted around the Glenville community. One of those ways is her part-time job as a rural postal carrier. She originally started at the Albert Lea post office in 2009 before switching to Glenville as a rural road carrier about two years ago. Attig said she’s a sub-carrier, which means she mainly works Saturdays and during busy or short-staffed times, such as holidays or when full-time carriers are on vacation. She said she has enjoyed the job, as it has been fun for her to meet different people through the office and to see different places around Glenville. 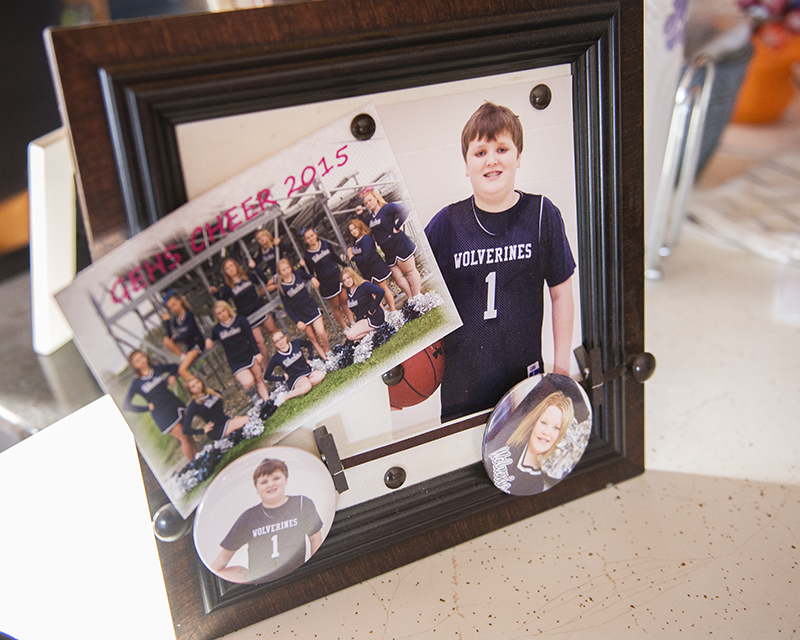 Photography has been a hobby of Attig’s since she was a child, and she takes portraits for a number of the sports teams within the Glenville-Emmons school district. – Colleen Harrison/Albert Lea Tribune

Another way Attig is seen around town is through different sporting events, where she can usually be found taking pictures. Attig clarified that she doesn’t consider herself to be a professional photographer, but said it’s a hobby she has been interested in since she was a child. She photographs several sporting events for the high school and elementary school, and has photographed team portraits, as well. Attig said she has also photographed weddings and some senior portraits.

“It’s a fun way to meet people,” she said. “I’ve always liked to take pictures, since I was younger.”

Attig is active with the school district in other ways, specifically through the athletic boosters, where she was the treasurer for eight years before deciding she just wanted to be an active member. She has also been heavily involved in organizing the group’s annual golf fundraiser, which she said is the main fundraiser for the school district’s athletics.

“If we want to keep sports in our schools, we need to have fundraisers,” she said.

“Our kids get the education they need,” she said. “There’s a lot of good people coming out of Glenville-Emmons.”

Along with her children, Attig is involved in her family’s church, Bethlehem Lutheran Church in Myrtle. Attig is on the church council and takes photos during different church events. Both of her younger children are active in Sunday school, and her 14-year-old daughter was recently confirmed at the church. Attig has also participated in the church’s Santa shop, where members make crafts and other items for children to buy for their parents for Christmas.

Attig and her family are farmers, as well, producing corn and soybeans each season.

For Attig, the best part about living in Glenville is the sense of community.

“When there’s someone in need, the community comes together,” she said. “It’s a nice, little community.”

Why Attig lives in Glenville:

Attig likes that Glenville is a small and close-knit community, and that people readily help out their neighbors when they can.

8 – Years Crop for a Cure has been taking place in Carpenter, Iowa

3 – Children Attig has, all of whom went to Glenville-Emmons schools