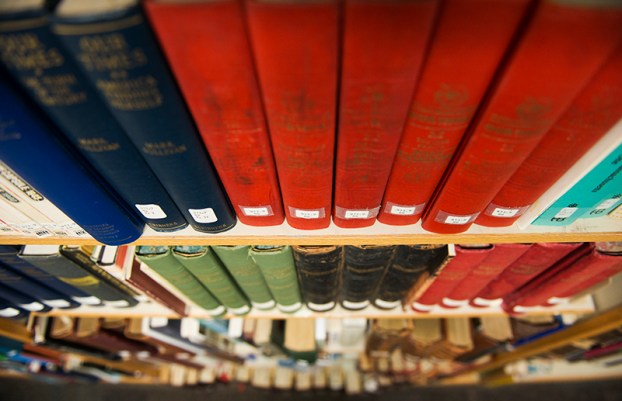 The main asset of the Freeborn County museum’s library

“She’s a very valuable resource for the museum” is how Pat Mulso, recently retired executive director of the Freeborn County Historical Museum, Library & Village, describes the role Linda Evenson has as the organization’s librarian.

Evenson became a part of the museum’s operations in 1991. At that time, the library was located on the upper level of the main building at the south end near what was then the main entry. Now, since 2012, the museum’s expanded library has been relocated to the lower level at the north end of the newer part of the building near the Freeborn County Fairground’s main entry arch.

“I enjoy getting a question or problem from someone and doing the research for the answer,” Evenson said.

Asked what she likes about the new museum library area, she replied, “More space and a more open area.” 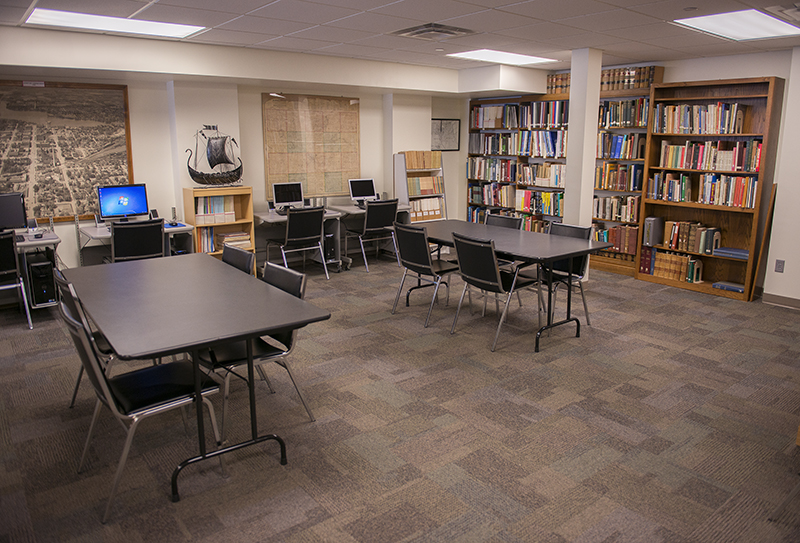 The new library area in the Freeborn County Historical Museum’s main building now has more room for visitors to do research on various topics, such as family and local history. – Colleen Harrison/Albert Lea Tribune

Regarding the main focus for inquiries from visitors to the library, she commented, “It seems to be ancestry for people from elsewhere and ancestry and past history by local folks.”

Which is used the most by visitors to the library — microfilm readers or computers? Her answer: “I’ve thought it out, and it’s still a hard one. It seems to be computers for ancestry research and microfilm readers for older newspapers and historical  documents.”

The last part, she added, could include visitors from elsewhere, who can’t easily access the information desired from other places.

Evenson’s duties as the museum’s librarian certainly reflect her community passion. Within the library is evidence of the community passion of two other people for their contributions to city and county history.

Within the library is a large section consisting of 184 notebooks designated as the Kevin Savick  Business History Research Area. In those notebooks are photocopies of area newspaper articles and business advertisements, plus photos that were collected and compiled through the years by Savick. He used the microfilm readers at the  museum and at the Albert Lea Public Library to do his historical research.

Savick died in 2011. He donated $140,000 for the museum’s new expansion, along with over 100 framed photographs based on the area’s past, which are now on display elsewhere within the museum.

The other person who contributed a good portion of the museum’s collection of photographs from the past is Bidney Bergie, who died in 2002. He lived in Albert Lea for about six decades and was deeply involved with the museum’s operations. He was also well known for his slide show presentations for many organizations and community events.

Among the archives in the museum’s library are microfilm copies of older Freeborn County newspapers published in Albert Lea, Alden, Bancroft, Emmons, Freeborn, Hartland and Glenville.

One newspaper, the Albert Lea Posten, was a Norwegian  language publication that existed from 1883 to 1885.

An even more obscure publication in the files is the Bancroft Pioneer. The weekly newspaper was published from 1857 to 1858 and owned by David Blakey, an early Freeborn County resident. He moved to Austin, Rochester, St. Paul and New York City. He gained fame as the man who persuaded John Philip Sousa to leave the leadership of the U.S. Marine Band and provided the financial support to start the world famous Sousa Band in 1892.

There is still another aspect of the museum’s archives that actually goes beyond county lines. The museum’s library has microfilm copies of older newspapers published in Blooming Prairie, Bricelyn, Ellendale, Kiester, Lyle, New Richland; an Owatonna weekly (1881 to 1921); and six weekly newspapers that were a part of Wells’ history from 1870 to 2007.

In her Tribune column published in the Dec. 27, 2015, issue, Mulso wrote that a grant had been received for shelving in the museum’s new archives room, scheduled to be completed this fall.

Evenson explained that the original archives room is still in the south end of the museum’s main building. The historical materials, like old highway road maps for example, are stored in boxes on shelving. They will be moved later into a room located in the museum’s new addition that will not be open to the public. She explained that the new storage area is based on mobile shelving on tracks and the materials will be available to visitors as requested.

Hours for the museum’s library are from 10 a.m. to 1 p.m. and 1:30 to 4 p.m. Wednesday through Saturday. During the half hour for the librarian’s lunch time, visitors can enjoy looking at nearby exhibits based on Marion Ross and Eddie Cochran before doing their research.

An Albert Lea man is raising awareness for breast cancer — on his own dime and time. Scott Stolaas, 51,... read more