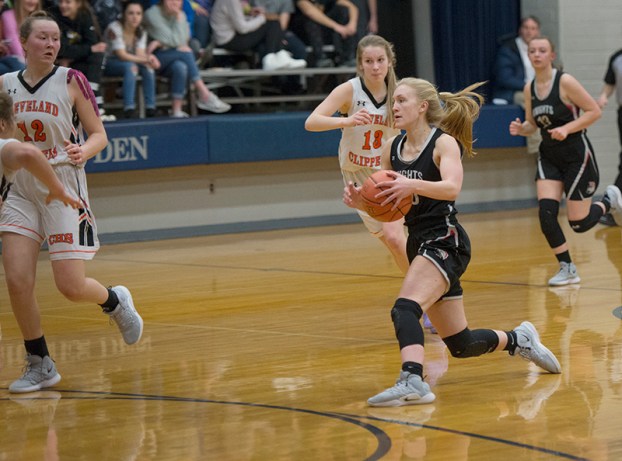 Alden-Conger/Glenville-Emmons junior Abbie Theusch led the area in points, rebounds and steals on her way to earning the Tribune’s Girls’ Basketball Player of the Year. - Tyler Julson/Albert Lea Tribune

For the second straight year, Alden-Conger/Glenville-Emmons junior Abbie Theusch led the area in points scored. This season, her offensive production and a host of other factors have earned her the top spot in the area, winning the Tribune’s Girls’ Basketball Player of the Year title.

Last season, Theusch scored a total of 454 points to lead the area by 23. She ramped up her scoring this season with 515 points to lead all other scorers by 35 points.

Theusch was part of a dynamic scoring duo with Erika Bute last season. However, after Bute graduated, Theusch was asked to step into the role of primary ball handler — a position in which she performed exceptionally well.

“I didn’t feel much pressure going into the season without Erika,” Theusch said. “But it was weird not having her to look up to for tips and ideas to make the team better.”

Head coach Jenny Hovendick said Theusch stepped up and took on the role of the floor general with relative ease and helped her teammates along the way.

“We leaned on her a lot to get our offense started on each possession and it showed in her assists, which went from 2.0 per game last year to 4.5 this year,” Hovendick said. “Lots of players can score a lot of points, but special players can create for their teammates as well and that is what we ask Abbie to do each and every day.”

On top of her 515 points, Theusch also led the area with 220 rebounds and 101 steals. She also tallied 99 assists, good for a second-place finish in the area.

While the team fell short of its goal of reaching a .500 record this season, Theusch said the team made strides in other areas.

“Like almost every other player and coach, I was hoping for the team to have more wins than losses by the time our season ended,” Theusch said. “Even though we did not meet that particular goal, I feel that we improved with other aspects of the game, such as getting younger teammates experience on the varsity floor and getting more comfortable playing with girls from another school.”

Theusch said she made great memories this season and her favorite was the game against Lyle-Pacelli, in which they came back to win after being down 20 points in the game.

“That’s one of the things that I’ll miss about the girls that are graduating this year, they always played until the end,” Theusch said.

Hovendick said the best aspect of coaching Theusch is her relaxed demeanor and her have-fun attitude on the court. According to Hovendick, she can be highly competitive on the court while still keeping things in perspective and realizing it’s just a game.

“I think this comes from her being such a well-rounded person,” Hovendick said. “Not only does she excel in multiple sports, but she is a straight-A student, an accomplished piano player, a member of numerous student organizations and works a part-time job. She keeps the game fun.”

Heading into next season, Theusch has set the personal goal of reaching the 2,000-point milestone. Until then however, she said she will hit the weight room and work on her skills by taking part in the summer league team set up through the school.