Marcene Marene (Austinson) Pell, 95, of Austin, passed away May 24, 2020, due to natural causes at Sacred Heart Care Center, where she resided for the past six months. Marcene celebrated her 95th birthday on May 17, and she knew it was time to say “goodbye” to her family. The family all gathered outside her window that day and she smiled and waved at us. 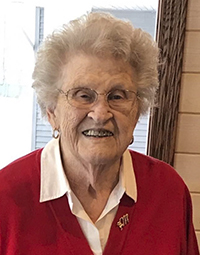 Due to COVID-19 restrictions, the family will hold a memorial/graveside service on May 29. A gathering will be planned at a later date for family and friends, if possible. Please keep the family in your prayers at this time. They will continue to celebrate her amazing life.

Marcene Marene was born May 17, 1925, in Nevada Township, Mower County, to Herman O. and Selma J. (Nelson) Austinson.  She was the fifth of 11 children. Marcene was baptized and confirmed at Six Mile Grove Lutheran Church in Lyle. She attended Lyle High School until age 16. After her mother passed away, Marcene helped take care of her brothers and sisters at home.

Lester A. Pell and Marcene M. Austinson met at the local roller skating rink and were united in marriage on June 6, 1944. Four children were born to this union: Shirley, Delores, Gene and Marcia. They were married for 61 years before Lester passed away in 2005. They farmed all their lives in the London area. Marcene worked at Sammy’s Pizza in Myrtle in the ’70s. They retired from the farm in 1985 and moved to Austin, where they resided for more than 25 years. Marcene did a lot of baking and cooking, but her specialties were lefse, kolaches and cookies. She served as a 4-H leader, and was a member of the Royal Neighbors, Pythias Sisters, neighborhood “birthday club,” Our Saviors Lutheran Church and a lifetime member of the American Legion Auxiliary. Marcene enjoyed traveling, sewing, embroidery, watching the Minnesota Twins, puzzles and going to the casino. She was an avid bowler and was proud of earning “Bowler of the Year” along with her daughter in 2000. Marcene loved her grandchildren and great-grandchildren, as they always made her smile, and she loved celebrating birthdays and holidays.  Her family was her life and it showed in her love to entertain them whenever she had the chance. She was always generous and thoughtful to all she knew.

Marcene’s family would like to thank the staff at Sacred Heart for their excellent care for her when she moved there in November 2019. Staff has always been so compassionate and helpful during her last months. Marcene suffered from dementia the past few years and also had a stroke in 2009, which brought her a new personality. But family loved her anyway! She will be missed by many family members and friends. Thank you to all who stopped to see her through the years. She always enjoyed her coffee and company. Clasen-Jordan Mortuary is in charge of arrangements.

Goodbyes are not the end

They simply mean ‘We will miss you Mom’

Until we see each other again.”

Darwin D. “Dar” of Glenville passed away peacefully at the age of 88 at the VA Hospital in Minneapolis on... read more