Warren Van Riper, who resided at ThorneCrest Retire-ment Community in Albert Lea died Monday, May 25, 2020. He was 97 years old. Warren was born in Albert Lea, Minnesota on April 17, 1923. 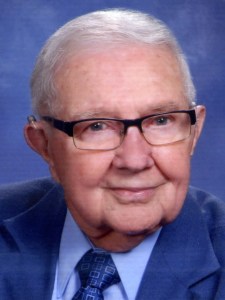 He was the son of James G. and Gladys Van Riper. He attended school in Albert Lea. On April 25, 1953, he was united in marriage to Elgene Brand at Zion Lutheran Church in Albert Lea. They made their home in Owatonna.  Warren was a Veteran of WWII, where he served as a telegrapher. After the service he continued to work as a telegrapher for Western Union. In 1969, they moved to Rochester, MN and in 1993 to Owatonna.  Together Warren and Elgene enjoyed Civic Music Concerts, Chanhassen Theater and travelling, seeing all states except Alaska. They loved to dance, both ballroom and square dancing. Where a dance was held, you would find Warren and Elgene. They were members of Trinity Lutheran Church of Owatonna. After Elgene Passed away, Warren moved to Albert Lea and resided at ThorneCrest Senior Living apartments, then later, the care side of ThorneCrest. Warren loved his time at ThorneCrest, where he met and made many new friends. He was also a member of First Lutheran Church in Albert Lea.  Warren is survived by his three sisters: Reedie Jacobs and Pat (Bob) Fjelbrotten of Albert Lea, Joan Loverink of Remer, MN, sisters-in-law Irene VanRiper of Glenville, Janice (Keith) Klinksiek of Elmore, MN,  Donna Knutson and April Brand; Goddaughter Sonja Hanson of Blue Earth, MN, many nieces, nephews and extended family; special traveling companions niece and nephew Rodger and Karen Christenson of Albert Lea and niece Judy Eckhoff.  Warren was preceded in death by his wife Elgene on May 5, 2014, his parents, brothers: Joe Van Riper, Richard “Rip” Van Riper, Pearl “Pud” (Ruth) Van Riper, Jim (Dee) Van Riper, Kenny (Wilda) Van Riper, John Van Riper, Casper “Cap” Jacobs, sisters: Beverly (Leo) Carr, Gladys “Sis” (Russ) Stauch, brother-in-law Tenny Loverink, stepfather Ernie Heilman.  He took much pride in the opportunity the had to attend and be recognized at the Honor Flight at the WWII Memorial in Washington DC on October 8, 2011.  Warren enjoyed his time at ThorneCrest. He expressed often of “my great care and good food”.  His family wants to express a huge Thank You to ThorneCrest for their kindness, and love as they cared for Warren. Thank you also to the family, friends and First Lutheran Church for all your thoughts and prayers.  “Uncle Warren” you will be missed, but you will live in our hearts forever. See you later.  Services were held at First Lutheran Church, Albert Lea.  Interment with Military Honors at Hollandale Cemetery.