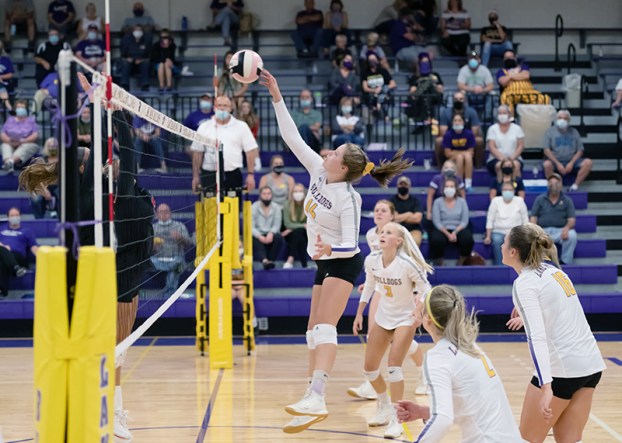 Junior Kit Byars skies up for a kill Thursday night against Garner-Hayfield-Ventura. Byars had five kills in the Bulldogs' 3-0 win over the Cardinals. - Lory Groe/For the Albert Lea Tribune

Lake Mills volleyball moves to 15-3 on the season

The Bulldogs made quick work of the Cardinals, defeating them by a larger margin each se,t 3-0.

Head coach Jim Boehmer said Garner-Hayfield-Ventura has improved a lot over the years and has a senior-dominated line up. Boehmer said he expected some adversity from them throughout the match and it showed, especially in the first set.

The Bulldogs got out to an early lead in the first set, however, the Cardinals battled back to make it close. In the end the Bulldogs won a tight 25-22 set. 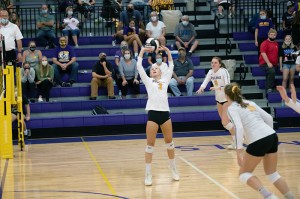 Junior Leah Moen sets up a teammate for a kill Thursday night at home. Moen led the Bulldogs with 22 assists. Lory Groe/For the Albert Lea Tribune

Lake Mills again jumped out to an early lead in the second set, and this time did a better job of curbing Garner-Hayfield-Ventura’s late rally, winning the set 25-19.

After a close back-and-forth affair in the third set, the Bulldogs stormed ahead to take the set 25-16 and the match 3-0.

“It was good to see that we improved our point differential each set,” Boehmer said. “You never want the girls to take their foot off the gas as the night continues.  So I was glad to see the end result tonight.”

Senior Kylie Greenfield led the Bulldogs in kills with 12, the only player in double digits. Juniors Brooke Bergo and Kit Byars each had five. Sophomores Ella Stene and Ellie Hanna combined for seven total.

Junior Leah Moen led the team in digs, serving and assists. Moen totaled six digs, 22 assists and was 14/14 from the service line.

Three other Bulldogs were also perfect at the service line: senior Emma Hoffman was 12/12, senior Makenna Hanson was 10/10 and junior Erica Jordan was 9/9.

The Bulldogs move to 12-3 on the season and 5-0 in the conference. They will be back on the court Saturday when they head to Nevada for a tournament to take on a tough schedule of 3A and 4A teams.