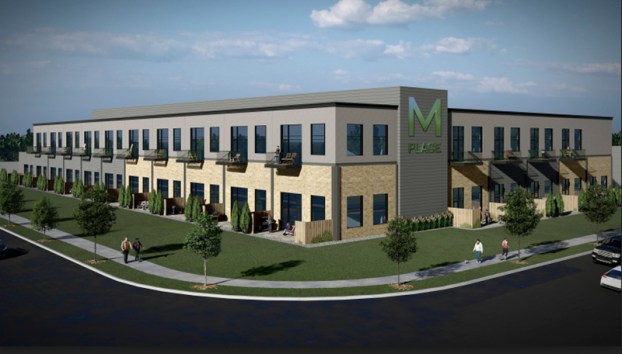 A proposed rendering of an apartment complex that is being proposed for the former Marketplace Foods building on West Main Street. - Provided

David Schooff with Coldwell Banker Commercial Fisher Group out of Mankato said he and his partners kind of fell into the project by accident when their client came to them looking to lease or sell the building at 1619 W. Main St.

“The more we dug into it, the more we understood the need for housing in your community, the more we thought that maybe we should do a project since that’s kind of our expertise in doing redevelopment,” Schooff said.

They came up with a plan for a 50-unit complex with one- and two-bedroom higher-level units. The building would also include amenities such as an exercise area and gathering space for tenants and would likely include the option for  indoor parking.

In the future, if things go well, there could be opportunities to do more, he said.

Schooff and development partner Wade H. Abed II said they hoped the project could bring a rebirth to that part of town.

The developers came before the council as they are working within a tight time frame to close on the sale of the property and because of some obstacles in developing a tax increment finance incentive plan, City Planner Megan Boeck said. The developers wanted to gain some political assurances to move with the purchase of the property before incentives are finalized.

Several of the councilors expressed support for the project during the meeting and said the city would support them moving forward.

“It was certainly sad to see the grocery store in our area close down, but it’s even sadder to see a building stay empty,” Third Ward Councilor Jason Howland said. “This is definitely a positive. There’s a need for this type of housing in our community, I believe.”

Albert Lea Mayor Vern Rasmussen Jr. thanked the men for their interest in the community and said the project would be a benefit to Albert Lea for many different reasons. Housing studies have shown the need for more of these types of units.

“There’s a huge unmet need here for market-rate housing,” First Ward Councilor Rich Murray said. “This is going to be a fantastic project. I think the council needs to get behind it and figure out how to make this work.”

As part of the project, the council approved calling a public hearing for the Nov. 9 council meeting about establishing a redevelopment tax increment finance district. A TIF incentive plan would provide economic development benefits to help offset project costs.

In other action, the council:

• Passed a resolution supporting an application through the Minnesota Department of Employment and Economic Development Job Creation Fund from Cargill Meat Solutions. The company has plans to invest $25 million into its Albert Lea location to expand its product offerings. The upgrades are expected to result in increased local tax dollars and additional jobs.

• Extended the city’s declaration and ordinance for a state of emergency another 30 days. This will be in place through Oct. 12 unless the governor’s peacetime emergency expires or is rescinded by legislative authority before then.

• Called a public hearing for Oct. 12 on proposed assessments for the city’s neighborhood improvement overlay project and for the reconstruction of James Avenue from Seventh to Eighth streets.

• Called a public hearing for Oct. 12 on proposed assessments for the Clark Street reconstruction from South Ermina to First Avenue.

• Called a public hearing for Oct. 12 on proposed assessments for delinquent water and sewer accounts and for miscellaneous delinquent accounts receivable.

• Amended the zoning and land use map for property at 300 N. 10th Ave. from community business district to single family residence district.

• Amended a tax abatement agreement for Wedgewood Cove Estates. The abatement will now be assigned to Merit Acquisition LLC.

• Approved an agreement with JD Kelley Properties for a matching grant for facade restoration at 101 S. Newton Ave. The grant, of up to $2,500, will come from the city’s Broadway Ridge Renewal Grant Fund.

• Accepted a $26,475 grant from the Office of Traffic Safety for the police department to use during next year’s Toward Zero Deaths enforcement waves. The program reimburses the city for cost associated with assigning officers during the enforcement. Funding will be shared with the Freeborn County Sheriff’s Office.

• Accepted a donation of $1,150 for placement of a memorial bench in honor of Herbert Mehus on the east loop of the Blazing Star Trail.

• Accepted a donation of $25 to the Senior Center from Donald and Elaine Ehrich.

Freeborn County reported its third COVID-19 death on Tuesday, according to local and state health officials. The individual was between... read more