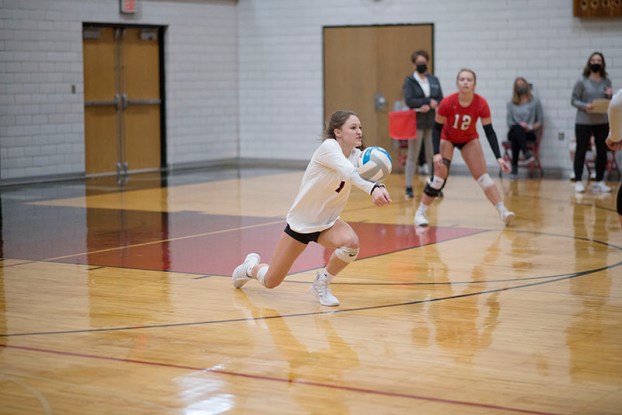 Senior Kylie Korman gets low to save the volley Friday night against Nicollet. Korman had eight kills and two aces in the 3-0 win over the Raiders. - Tyler Julson/Albert Lea Tribune

ALDEN — One night after losing its first game of the season, the Alden-Conger volleyball team was out for retribution while hosting Nicollet Friday night.

Alden-Conger started the first set in a slump, falling into a 9-5 deficit. However, slowly but surely the Knights started working their way back and eventually tied the set 13-13. From that point on, it was all  Knights. Thanks to hard hitting by numerous players, including seniors Kylie Korman, Abbie Theusch Grace Erickson and junior Mady Stein, the Knights had no trouble disposing of the Raiders. 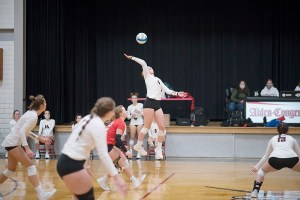 Senior Abbie Theusch gets up for one of her nine kills Friday night against Nicollet. Theusch also recorded two aces in the match. – Tyler Julson/Albert Lea Tribune

Highlights from the rest of the match include a 15-3 run by the Knights to open the second set, and a 15-6 run to close out the third set.

Theusch led the Knights with nine kills, but Korman was right behind with eight. Erickson had seven and Stein totaled four.

The foursome also combined for a total of six aces throughout the match.

The Knights end their season with a record of 10-1 and will lose seven seniors to graduation.

Minnesota Gophers going through pains, as Purdue Boilermakers are up next

MINNEAPOLIS — After the 2019 season for Minnesota signaled a breakthrough for a long-middling program, coach P.J. Fleck has found... read more