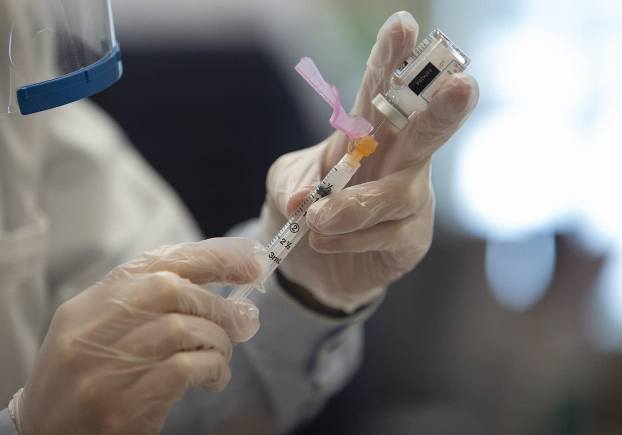 Pharmacist Dan Cook prepares a dose of the COVID-19 vaccine at the Gardens of Episcopal Homes in St. Paul. Christine T. Nguyen/MPR News

Minnesota is launching a new pilot program to expedite COVID-19 vaccinations of people age 65 and older at community vaccination sites across the state. The program also includes plans to distribute a share of the limited vaccines for child care and school staff.

Not all Minnesotans who are eligible to get a vaccine under the new program will be able to get it immediately. Minnesota is only receiving roughly 60,000 doses a week. At this current pace of vaccine supply, it will take more than four months to get through the one million or so newly-eligible Minnesotans, according to Minnesota Health Commissioner Jan Malcolm.

“I plead for your patience,” Gov. Tim Walz said as he and state health officials rolled out the new program Monday.

The governor is hopeful President-elect Joe Biden’s administration will provide more clarity around the distribution and availability of the vaccine in the coming weeks. President Biden said he wants to vaccinate 100 million Americans during the first 100 days of his administration. Walz is confident that would reach all Minnesotans in the new eligibility group.

“We are building for the future and doing what we can to get more shots to Minnesotans right now,” said Governor Tim Walz. “By beginning to serve those age 65 and older, educators and child care workers, we are immunizing for impact. It’s a step in the right direction on this long road to recovery. The federal government has been giving mixed messages on vaccine availability and guidance, and we need them to step up and get more vaccine to the state. When they do, we will be ready. The end of this pandemic is closer today than it was yesterday.”

Eligible Minnesotans must schedule their vaccination appointment on the state’s COVID vaccination website beginning at noon on Tuesday.

As of Friday, Minnesota has administered first doses to 194,462 individuals across the state, and 38,025 have received their second dose, according to the state’s dashboard.

Minnesota reported 12 additional deaths due to COVID-19 on Monday, as cases and testing also fell over the weekend.

The deaths were among the lowest in months.

There were other encouraging trends, as well. New cases fell below 1,000 for only the second time in 2021. And the seven-day average for the rate of confirmed cases among new tests dropped for the 10th straight day. It’s now at its lowest point since the first week of October. At 4.6 percent, it also marks a third straight day below a 5 percent threshold that health officials consider concerning.

The state is averaging about 31 deaths a day over the past week, the lowest that number has been since Nov. 10. The average test positivity rate is now just below 4.6 percent.

One metric going the opposite direction, at least for the past few days, is the average number of new COVID-related hospital admissions each day. Averaged over the past week, it’s been ticking upward, to about 86 a day. Despite the recent rise, that number is still lower than a week ago.

Newly reported vaccinations fell just short of 12,000, a little below the rolling seven-day average for doses administered. The state now says just under 40,000 Minnesotans have received both recommended doses.

That’s from about 517,000 doses of COVID-19 vaccine that have been shipped to Minnesota so far, including the federal program for long-term care facility vaccinations.

State officials are working on plans to expand vaccinations to more people — though as of last week they were left scrambling after federal officials said they did not have an expected stockpile of vaccine doses to share with states and support that expansion.

People in their 20s still make up the age bracket with the state’s largest number of confirmed cases — more than 85,000 since the pandemic began, including more than 45,000 among people ages 20 to 24.

The number of high school-age youth confirmed with the disease has also grown, with more than 34,000 total cases among those ages 15 to 19 since the pandemic began.

Although less likely to feel the worst effects of the disease and end up hospitalized, experts worry youth and young adults will spread it to older relatives and members of other vulnerable populations.

It’s of particular concern because people can have the coronavirus and spread COVID-19 when they don’t have symptoms.

A relatively small bump in new cases has been happening across the state.

Hot spots continue to pop up in rural counties relative to their population.

In Minnesota and across the country, COVID-19 has hit communities of color disproportionately hard in both cases and deaths. That’s been especially true for Minnesotans of Hispanic descent for much of the pandemic.

Even as new case counts ease from their late November, early December peaks, the data shows people of color continue to be hit hardest.

Distrust of the government, together with deeply rooted health and economic disparities, have hampered efforts to boost testing among communities of color, officials say, especially among unauthorized immigrants who fear their personal information may be used to deport them.

Similar trends have been seen among Minnesota’s Indigenous residents. Counts among Indigenous people jumped in Octoberrelative to population.