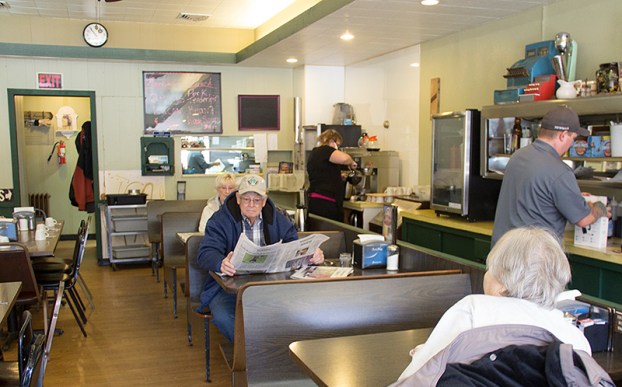 ‘We’re really happy to be opening’

Restaurants and bars in Albert Lea reopened for indoor dining on Monday after Gov. Tim Walz partially lifted limitations that had been in place to reduce the spread of COVID-19.

According to the new guidelines, the establishments can now be open at 50% capacity, and cannot serve food after 10 p.m.

He said his mother has had the business for almost 15 years, and it was especially challenging in the last two months when restaurants were limited to takeout and delivery.

“She was so sad about closing,” he said. “She took it to heart.”

He spoke of trying to cancel or limit expenses when the business was closed for in-person dining to save money, including towel service and garbage service as well reducing orders for its food truck contract.

“She muddled through it, and hopefully it’s all behind us,” he said. “We’re really happy to be opening.”

In the restaurant Monday morning, he was filling out paperwork for the local grant program for businesses and nonprofits in hopes of receiving some relief.

He said his mother’s business has not received any grant funding since the start of the pandemic and it has lost three of its employees with the openings and closings over the last year.

Nancy Newman said the recent closure was harder than it was the first time around, without the weekly $600 unemployment benefit and the $1,200 stimulus payment.

“This time was really hard for us, but we’re not going to give up,” she said.

She thanked all of her loyal customers and asked for continued support.

Debbie Oakland, cook at Geneva Bar & Grill, said the Geneva restaurant opened at 11 a.m. Monday and had steady business throughout the afternoon.

She said her customers were happy to be able to sit down and visit.

“Their spirits were really high that they can just breathe somewhere,” she said.

While the business had always had takeout, during the shutdown it started offering delivery to areas, including Owatonna, Glenville, Austin and Albert Lea. She said the business plans to continue that in the future.

Also opening Monday were movie theaters, bowling alleys and museums, which can open at 25% capacity or a maximum of 150 people in each area of the venue. Face coverings will remain required.

The loosened restrictions came as a new coronavirus variant moves into the state.

The arrival of the variant, first identified in the United Kingdom in September and announced in Minnesota on Saturday, didn’t surprise officials. But they said it underscores the importance of slowing spread of the virus by wearing masks, maintaining social distance and quarantining if exposed.

“Whether this new strain infects more people will be determined to a large degree by how rigorously we all practice those protective measures that are so important,” said Sara Vetter, assistant director of the health department’s public health lab. “Getting as many people vaccinated as possible will also be critical in the control of spread of this variant and the emergence of other variants.”

The five cases, in people ranging from ages 15 to 37, are all in the Twin Cities metro area, with two reporting to have travelled internationally. Health officials said 63 cases of the variant have been found in eight states so far, and early evidence shows the vaccine is effective against the variant.

Amid questions around the pace of the state’s vaccine rollout, health officials said Monday they are looking at ways to improve efficiency, including challenging providers to give shots on weekends in addition to the current weekday schedule. More than 147,000 doses of the vaccine have been administered statewide as of Monday, and health officials said they expect numbers to steadily increase as the process becomes more efficient.

“Are we satisfied? No. We would like to speed up every step of that process that we can,” said Health Commissioner Jan Malcolm. “We are working hard with our vaccination partners to make sure that any part of the process that is under our control, that we are getting more and more efficient at that.”

The Minnesota Department of Health on Monday reported 980 new infections and four deaths, marking the second time since October that single-day cases dipped below 1,000 and the first time since early November the state reported single-digit deaths. The state’s totals now sit at 437,552 cases and 5,711 deaths since the start of the pandemic.

Deaths and hospitalizations continue to decline, with the seven-day average of daily deaths dropping from 42.43 on Dec. 27 to 39.57 deaths per day on Sunday, according to The COVID Tracking Project. Patients hospitalized due to COVID-19 numbered about 686 as of Sunday, including 141 in intensive care.

— The Associated Press contributed to this article.

A reason to celebrate

Austin couple rings in the new year with baby girl AUSTIN — From now on, New Year’s Day will have... read more