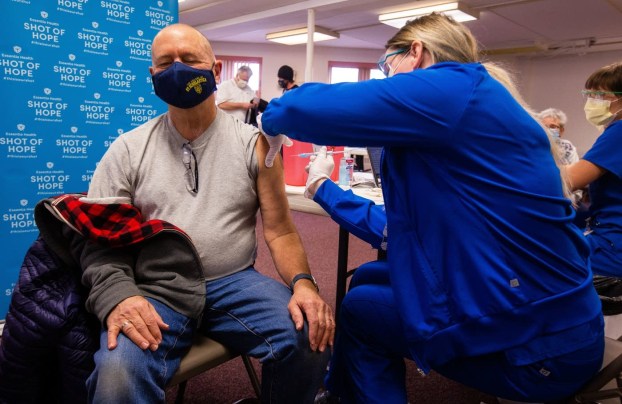 Gary Boelhower receives a shot of the Moderna vaccine from Essentia Health nurse Jen Lemone on Feb. 26 in the basement of Asbury United Methodist Church in Duluth during a vaccine clinic targeted at the BIPOC community in the city. Derek Montgomery for MPR News file

Race for vaccines is on as people in hospital, cases rise

Minnesota’s most recent COVID-19 data shows the state remains in a pattern of hopeful increases in inoculations and worrisome growth in new cases and hospitalizations.

Officials, though, are also cautioning people not to read too much into the numbers during the first few days of this week given the delays in reporting over the Easter weekend.

Tuesday’s data showed nearly 1.2 million Minnesotans — about 27 percent of the state’s adult population — are fully inoculated while more than 1.8 million — about 42 percent — have received at least one dose, including about 83 percent of residents age 65 and older.

The agency reported about 52,000 more vaccinations. Minnesota expects to see its federal vaccine supply shipments jump over the next few weeks.

Officials have described the current situation as race against time to vaccinate as many Minnesotans as possible before the COVID-19 variants can get a stronger foothold in the state.

They’ve confirmed about 1,000 cases in the state of the highly contagious U.K. strain in recent weeks and believe it’s responsible for the majority of the spread that happening now.

To help win that race, state and federal officials on Monday unveiled plans to vaccinate as many as 100,000 Minnesotans over the next eight weeks at a site to be built at the state fairgrounds. The site will prioritize underserved communities hit hardest by the pandemic.

The number of known, active cases has been trending upward over the past few weeks, with 15,679 active cases as of Tuesday’s report — marking nearly three weeks with active counts above 10,000, a stretch not seen since January.

While still low compared to late November and early December, the rising trend is notable given the worries over the rise of the U.K. COVID-19 strain, which state health officials suspect is driving the current upswing.

Hospitalizations counts are also moving higher. Agency data showed 497 people with COVID-19 in Minnesota hospitals; 114 needed intensive care. Daily admissions to hospitals because of COVID-19 are trending at their highest levels since January.

Four deaths reported on Tuesday raised Minnesota’s overall pandemic death toll to 6,889. Among those who’ve died, about 62 percent had been living in long-term care or assisted living facilities; most had underlying health problems.

The state has recorded 530,662 total confirmed or probable cases so far in the pandemic, including 3,014 posted Tuesday. About 96 percent of Minnesotans known to be infected with COVID-19 in the pandemic have recovered to the point where they no longer need to be isolated.

Regionally, all parts of Minnesota are in better shape than they were in late November and early December. The latest numbers, however, show cases creeping up in almost every region of the state.

Public health leaders continue to keep watch on clusters in the southwest Twin Cities metro area as well as Mankato in southern Minnesota and around Aurora and Ely in the northeast. Central Minnesota is also seeing a rise in positive COVID-19 cases.

People in their 20s still make up the age bracket with the state’s largest number of confirmed cases — more than 98,000 since the pandemic began, including more than 51,000 among those ages 20 to 24.

The number of high school-age youth confirmed with the disease has also grown, with more than 41,000 total cases among those ages 15 to 19 since the pandemic began.

With kids increasingly returning to school buildings and sports, Minnesota public health officials are urging Minnesota families with children to get tested every two weeks for COVID-19 now until the end of the school year.

Although young people are less likely to feel the worst effects of the disease and end up hospitalized, experts worry they will spread it unknowingly to older relatives and members of other vulnerable populations. Those with the coronavirus can spread it when they don’t have symptoms.

Two new hospitalizations were reported in the county.

Freeborn County Public Health Director Sue Yost reminded people the COVID testing site is still open at the Albert Lea Armory from noon to 6 p.m. on Mondays and Tuesdays. The site performs saliva testing for people with or without symptoms.

As of Sunday, 10,537 people in Freeborn County had received at least one vaccine dose and 6,394 had received the completed series.

The following is an update on other area counties:

The Albert Lea Area school board on Monday heard plans for the graduation ceremony for the class of 2021.  The... read more