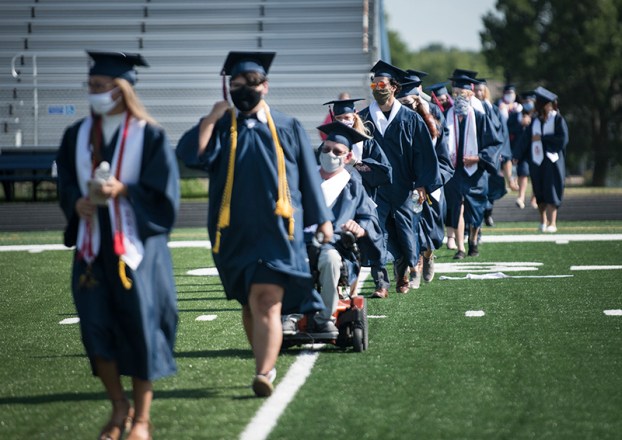 Albert Lea High School students take the field at the start of the first of two commencement ceremonies in 2020 at Hammer Complex. Colleen Harrison/Albert Lea Tribune

The Albert Lea school district’s four-year graduation rates improved by 5% overall from 2019 to 2020, according to new data released this week by the Minnesota Department of Education.

“To see our district student rate increase by 5% during the start of the pandemic demonstrates a tremendous commitment from our students, their families and our staff,” said Albert Lea Area Schools Superintendent Mike Funk. “These are very good results, as we continue to move toward our district goal of a 90% graduation rate.”

A press release from the school district said the increases across the various student populations reflect the hard work and dedication from students on their graduation path, as well as staff, and the support given to students to achieve the increased graduation goal. 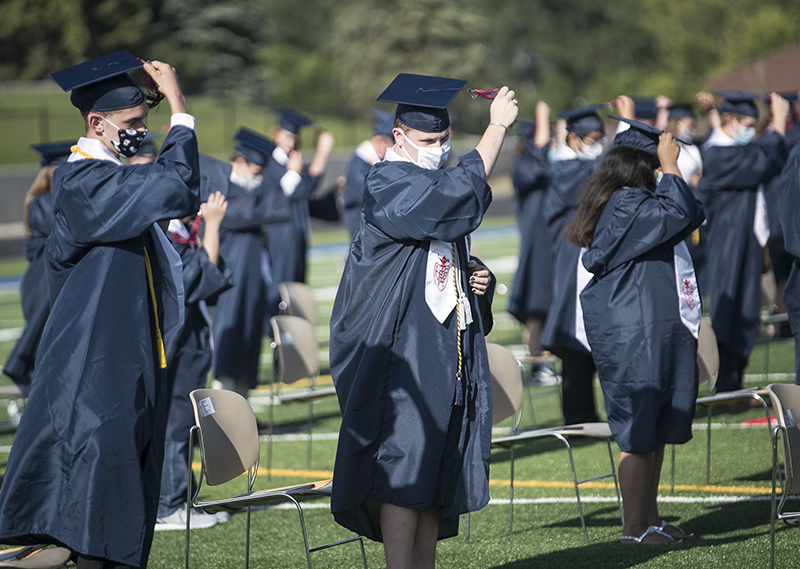 Students move their tassels to the other side of their caps after receiving their diplomas during the first graduation ceremony in 2020. Colleen Harrison/Albert Lea Tribune

Statewide, high school graduation rates held steady. The Minneapolis Star Tribune reported Thursday that almost 84% of last year’s seniors graduated in four years. That’s a new record but only by one-tenth of a percentage point over 2019. Dropout rates continued a steady decline, dropping from 4.4% to 3.7%.

Still, large gaps remain between student groups. About 89% of white and Asian students graduated in four years compared to 70% of Hispanic students, 69% of Black students and about 56% of American Indian students. That group saw a nearly 5% increase in graduates last year, the biggest gain of any student group in 2020.

Data for the class of 2021 won’t be available until sometime next year.

— The Associated Press contributed to this report

Excessive heat will continue into today with heat indices of between 95 to 100 degrees expected. According to the National... read more