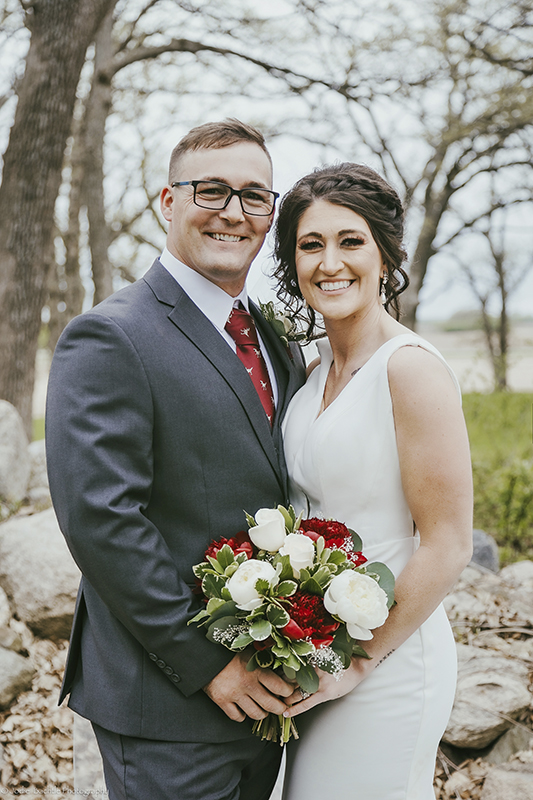 Brandi Hagen and Zakry Krenz, both of Hayward, were married May 8, 2021, at Country View Acres in Joice, Iowa.

Brandi is the daughter of Renea and Troy Hagen of Twin Lakes and the granddaughter of Glen and Louise Hagen of Albert Lea, Gary and the late Marlys Troe of Lake Mills, and Jane and the late Harris Hillman of Gordonsville.

Zakry is the son of Wendy and Troy Farmer of Dillon, Montana, and Darrin Krenz of Burnsville, and the grandson of Dennis and the late Linda Lau of Northwood, Janice and Arnie Krenz of Truman, and David and Sue Farmer of Albert Lea.

The bride is a 2007 Albert Lea High School graduate. She graduated from Winona State University in 2011 with degrees in psychology and photojournalism. She is the owner and photographer of Bragen Rights Photography, a paid-on-call firefighter at Albert Lea Fire Rescue and a coach at Anytime Fitness.

The groom is a 2010 Alden-Conger High School graduate and is a supply sergeant for the Minnesota Army National Guard.

Barrett Spilde and Kynslee Haberman are other godchildren and were in the honorary bridal party.

Hosts and hostesses were Tammy and Dan Fink and Julie and Frank Soukup.

Live music was provided by Elisha Marin and Devyn Rae Music. Holly Karsjens was the reader.

Rehearsal supper was catered by Trinity and Katie Emery of Tattoo Barbecue.

Meghan Ewing and Nicholas Jepson, both of Glenville, were married Jan. 23, 2021, at Country View Acres in Joice, Iowa.... read more